Inbound Marketing Strategy: Is It Right for Your Company? There’s no universal Go-To-Market Strategy. After all, the whole point of a GTM strategy is to craft one that fits your business’s needs, objectives and product. Your strategy should pinpoint how you will message your product’s value propositions in content marketing and gain a competitive advantage in the marketplace.

To provide a unique perspective on creating GTM strategies, we turned to Mike Donnelly, Co-Founder & CEO of Seventh Sense, whose company took the less common approach of doing more inbound than outbound marketing for their software product.

Determining to do more inbound than outbound marketing of course takes careful consideration and planning, but the results can be astounding if you craft the strategy in such a way can support and align with your goals and revenue marketing strategy.

Check out this episode of Growth Marketing Chat as Mike reviews:

Curious if inbound marketing may be a better fit for your efforts? Tune in now to learn more!

CAROLINE: Hi, welcome to Growth Marketing Chat. Today, I am here with Mike Donnelly. Mike is the CEO and Founder of the Seventh Sense, which is a really cool piece of software that helps marketers get the audience more engaged with their emails. And I’m going to stop there and let Mike tell us a little bit more about that. Mike, thank you so much for being with me today.

MIKE: Yeah, Caroline, I appreciate you reaching out and ultimately looking forward to having this discussion. So, I’ll just kind of give an eye-level of what we do with Seventh Sense. If you think, and, I’ll compare it to something that marketers are, tend to be very familiar with. You’ve got website optimization. You’ve got conversion rate optimization, and then you have search engine optimization.

However, none of those tools in the optimization space really existed for email marketing, and so that’s what we’ve built. And likening it to SEO… What’s the goal of SEO? It’s to get you as high as possible in Google search rankings because nobody does a Google search and goes, you know, clicks the 10th page to find their answer.

MIKE: Our goal is to get you as high in the inbox as physically possible, so that your emails get seen and ultimately engaged with, and at a 10,000 foot view that’s kind of who we are, what we do.

CAROLINE: That’s awesome. That’s awesome. And email is still pretty much the number one channel for so many marketers out there. So, I think it seems really weird that there are no tools to really optimize that. But yeah, that’s, that’s a great tool. I encourage everybody to check it out. But today we’re gonna talk about, we’re going to talk about growth, right? And we’re going to talk about go-to-market strategies. And something that’s really you know, unique about how you went to market, Mike, with the Seventh Sense, is that you used more inbound than outbound. So, I’d love for you to tell us a little bit more about this, how you did it and how it helped you.

MIKE: Yeah, so, and I would say there was still somewhat of an approach with kind of in-between inbound, outbound, some account-based marketing, you know, all of the, all of the buzz words of today in how we went to markets. But one of the things that we decided very, very early on with our technology was that it fits better in a marketplace. Somebody that is, has built a platform with API’s that allow you to integrate with them and just add value on top of their quote-unquote platform, and very early on HubSpot in their early stages were, I shouldn’t say in the early stages but, they were very early in their stages of building a marketplace and a platform in switching from a feature, you know product and feature company into a platform company. So, we engaged with them. Ultimately, we’re one of their first integration partners in that marketplace and it’s just grown tremendously from there. So that was one approach on the inbound side.

The second was, and I don’t know that I was a huge believer in this because prior to co-founding Seventh Sense I was an enterprise outside sales rep. And that was very much what they call a hunt, you know, have that kind of hunter mentality where it was very much outbound, and referral based. And I didn’t know of the power of starting to build good content and start ranking for search. And we had written some articles but, we never focused on, you know, doing keyword research. We wanted to make sure that the content was hugely valuable but, we didn’t think about the implementation of it on the back end. And then once we started writing content in a way that Google would index us and drive more traffic to us, we really started seeing a bump in kind of inbound leads.

I would say, when we first started the approach, we were maybe getting one lead every two weeks. Then it became a lead every week. Then it became a lead every day, and it has just exponentially increased there. And also, our traffic has increased significantly, and it hasn’t just increased in, you know a lot of people focus on I’m going to make a KPI that is website traffic driven. Sure, that’s important to look at. I mean, our website traffic increased by about five X over two years but, what we were more, what we were more concerned with, or looking at was what is the quality of that traffic?

MIKE: And the quality just continued to go up and up and up and up, as we ranked for keywords that we really cared about because as any start-up type software company you’re going to have you know, you’re really early adopters. And the keywords that we ranked for were really around kind of early adopters of technology like ours. You know, people that had heavy volumes of email, truly viewed email as a growth channel versus a commodity channel. And so that’s what we were really focused on, was content that would support those people’s efforts.

And then we’ve also, again we’ve done some outbound, you know, where it’s very heavily accounts or, you know, we do a lot of upfront research before we’ll do any kind of, you know, outreach. We have not done… I shouldn’t say we have not done. We’ve done very, very, very little paid advertising. Whether that be in the form of pay-per-click or social advertising. So, and then as the business has grown, we’ve obviously gotten known in the HubSpot marketplace or HubSpot ecosystem, as well as the, you know we also have an integration with Marketo and that has grown over time. And so, we get asked to speak at virtual events, physical events, and that obviously is more of an inbound methodology where we go out, we talk about email marketing, or we talk about a specific topic. And then the next thing, you know, more leads come into our into our funnel. So, at a very high level, that’s really been our approach but, I’m happy to dive in or dig into anything, you know any specific questions that you might have.

CAROLINE: Well, so one of my questions is when did you start focusing on SEO, like throughout your growth… It’s pretty rare, I think that companies starts focusing on SEO from the, from beginning which I think is a mistake, personality, being very biased but, also having seen the results right? Of focusing on SEO. So, when did you do it?

MIKE: Yeah. So, and it’s one of those things as a, you know a first-time company founder, I would actually… if I were going to do this again, I would start on SEO day one, because it ultimately takes time and you learn as things go like, it’s not just, you know there’s no silver bullet or magic wand. Articles that you write that you don’t think. And this article is not that, you know I think it’s valuable, but it’s probably never going to rank, it’s probably not going to get a lot of, you know, search traffic. And then the next thing, you know it’s one of your best posts.

And so, it took a, it took me about two years to get out of my own way and kind of arguing internally with our team, once our team, specifically a gentlemen named Ivan, he had a lot of great ideas behind it, and I used to fight it. And then he just kind of, he stopped telling me that he was doing it. And then six months later he came and showed me the results. And he was like, and you would hear when you would get on the call with people that would be inbound leads that would request a demo or request a conversation and then you would ask them, how did you hear about us? Well, I was searching for XYZ on Google and your guys’ name popped up. I went to your website, and I was like, wow this actually looks like it could solve a significant challenge that I have. Let me see what they have to say. And that’s been again, when those when I started seeing all of those things come together about six to nine months after Ivan really just kind of shut me down and went off and did it as a kind of side project, we became fully invested and kind of all in, on that approach.

And now one of the things that we do, which I think is a huge missed opportunity… And again, it’s one of those things that you learn as time goes on, is taking your assets that are either performing well or are not, are not performing well, and adding to them every six to nine, 12 months rewriting some of the content. And I’m not just talking about changing the publishing date but, making sure that those articles are kept up to date and, you know, new research that is original gets incorporated into those pages, because that will actually drive you even more traffic. And you really can get significant bumps in overall search results when you take that approach of keeping your existing content up-to-date or taking your low performing content and adding to it. I would say that is even more impactful than sitting here trying to guess at which articles to write, you know, every single week.

CAROLINE: Right, right, right. Yeah. Your existing content is so valuable and you’re right. It’s totally under leveraged. It’s so important. Yeah. Yeah. Well, great. You know, I think this was really insightful. I love hearing stories of companies that go inbound first. So, thank you so much for sharing your experience with us today, Mike.

MIKE: Yeah. Thank you, Caroline. I really appreciate you reaching out and having me on. It’s great to, it’s great to see you again. 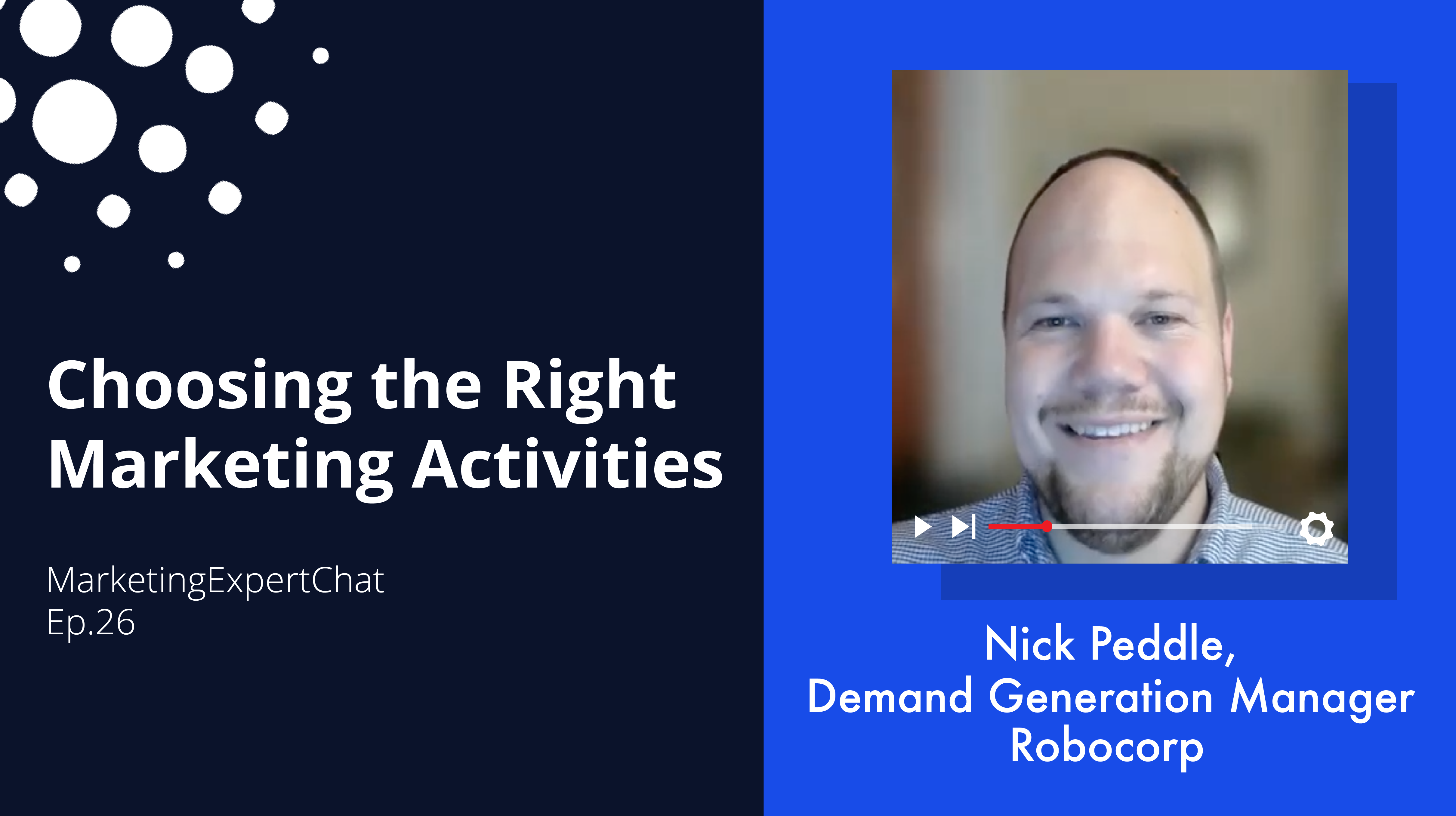 Don’t Hold Back! Get Innovative with Your Marketing Strategy

Should You Let Your Growth Marketing Agency Talk to Sales?